I love my Infinite Light pendant! When I got it I was able to feel an intense energy and when I put it on I felt a field, an orb, all around me. When I go through something or I have a physical discomfort I focus on the pendant and the issue is gone, some times right away, some times it takes a bit.
Also I use this energy, which the pendant emanates, as healing energy, like using Reiki, I just focus on a person or on myself or on my dog and I feel the energy come out from my hands and travel to who, what or where I am sending it to. This is my experience, we are all different and things work uniquely for each individual. 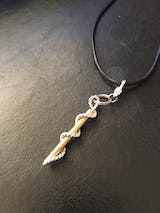 I used the Quantum Healer on the "World Ring" I made. It is to help heal the earth, all her inhabitants, and beyond. I use your amazing tools in almost all the energy healing things I make, it takes the healing energy to another level. I'm beyond grateful to Brian, Brenda, and the whole team, human and spirit, for all you do! 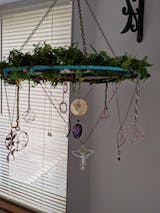 Great little triangulation of three pyramids.
Added to meditation room.
Grounding in the Beyond. I slowed my mind down & entered that peaceful “heart space.” Then I did the infinity & circle motions to my left hand from a close distance. At first, I didn’t feel anything, but within 2 minutes I felt the sensation of the wand quite strongly. I was surprised at how powerful & versatile it is. If you’re a spiritual worker, I would highly recommend this. ~~ I do wonder why this Particular geometry works as a column of light, yet the geometry of the rings are also create light columns ?? ~ great tool/product 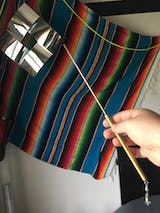 The first time I hung my new Quantum Healer around my neck, I felt like I was cocooned in love in an expending cloud. I sensed a restructuring happening all around my body. My body was tingling and very powerful energy was coming out of my hands and feet. I do not take it off and enjoy the wonderful feeling of wellbeing all the time except when using it for healing. I have started meditating by myself again, and my energy is constantly high. I know that it protects me from the negative/bad energies that are around which leaves me more relax about it. I would recommend it to anyone even if only to wear as a pendant. It is beautiful, thank you Twistedsage.

Wearing this beautifully crafted Torus pendant brings life into clearer focus for me. There is a crispness to the field around me when wearing it. And it is subtle; soft and full of heart- I’ve learned much while wearing it. It seems to refine and restore me. Often I’ll forget I’m wearing it! It is the only Twisted Sage tool I’ve been able to wear while sleeping; there is no interference to dream time or with connecting to my guides and angels. It just melds into my energy field. Of all my purchases of Twisted Sage products, and I love them all, this is my favorite. It is an exquisite creation and coalescing of energy into a physical form. Divine! I could go on and on, but I think you get the idea.

Almost a year ago...I bought the Golden Fire and Light wand with interest but with skepticism. After the first month and a bunch of light columns later...I became a believer and it has changed my life in a profound way! It does what is says it does!! I now have the practitioner size and it is AMAZING!! 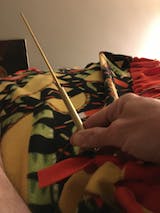 Can’t quite put my finger on it but loved it from the moment I put it on. I rested it on my relentless aching hip once and the pain went away. I was amazed and had only rested it there out of desperation. Thank you for this beautiful gift.

I call this ring "my two way radio". I added a Cintamani stone pendant to it and the energy blew my socks off :-)
I use this ring to assist me with my communications with the "unseen". It really works! 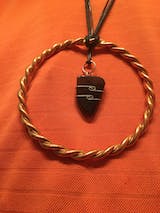 These generators are helping me with some spirit entity stuff in the home. It is also helping to bring me back to the Light by raising the vibration and Light of my home. I think everyone should get one to raise the vibration of their home/place. You can actually feel a difference with its presence

I love the clear energy I get and the feeling of balance around the pyramid. I have been wearing the quantum healer wand along with the golden fire coil and it feel like my heart is clearing and transmuting any negative into something of a higher vibration. I have felt less attached to other people’s feelings. I feel more free and flowing along the river of life with all its twists and turns, rough rapids and rocks, and back to a smooth flow.

Infinity bracelet- This is such a lovely tool for enhancing attention, focus, and general well-being! It actually load when I first open the box! And at hums Or should I say it vibrates all day long while I wear it and that starts from the time I pick it up! I got this for myself on my birthday and I absolutely love it I wear every day! Thank you for creating such a beautiful powerful tool

This was a gift for a very special person, but I could feel the power! 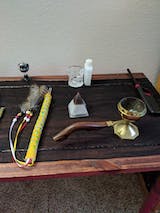 This is a very powerfull tool. The vibration is very high, and it harmonizes all of the electromagnetics proof! It works for me better than a Harmonizer. The Wings of Tok pushs my personal development. Old stuff, can I leave behind me, very quick, and it brings me more clearness and more Energy in my life.
Negative Persons around me, getting quite, since I have this Tool.

I have the 1" Golden Fire Gaia.
When it first arrived, it brought such a huge wave of joy and peace, a truly uplifitng piece of kit! Now, when i carry it into a space, i enjoy the harmony, peace and connectedness it brings. Another step towards Unity consciousness. Compared to the golden fire generator, the geometry of the gaia, beings inother level of beauty and protection into the field of this tool, not protection from fear, but protection of love, grounding and harmony, brings peace which transmutes, and there is "protection" in that. A lovely little being to hold and wear over the heart. Shifts spaces and your being to a more harmonious one, i really should wear it more lol. And the consicousnes of the earth coming rhroguh is just so amazing, it really attracts people to its presence, a lovely field to rest in. Activations, cleaning and clearing. Wonderful! And i put some little crystals in it too, i had amethyst in for a while but felt a lovely shift when i added Lapis Luzuli, it adds an expansive energy to it.

I placed an order for this beautiful piece, and in a very short amount of time, I received it. When I first removed the pendant from the packaging, I felt a crisp, clean, clear energy radiating from it, so you can imagine how excited I was to wear it. After having it on me for a few minutes, I didn't notice any difference in my energy, nor did I feel any type of activation. However, when I laid down to take a nap in the middle of the day, things spontaneously changed for me while wearing the pendant. I saw many things with my eyes closed, and in one of the visions, someone handed me a clear crystal ring. When I accepted it, light came pouring into my electromagnetic field. I had several wayward spirits coming into my field wanting to cross over into the light. As this was happening, I heard a reporter informing me of the individual wayward spirits and how they had left their bodies. Many of them were young people who had been in car or motorcycle wrecks near my residential area. As I accepted them into my presence, they immediately crossed over. Some even said that they were leaving me at that time. Just to note, it is a very powerful tool. In my dream, I saw two flying crafts (UFOs) and they beamed a powerful stream of light into my third eye region and the back of my head. Although it did not hurt, I could feel the pressure. Wow! I also visited with a friend of mine this evening while walking my dogs. She was having soreness in her right wrist, so I took hold of her arm and wrist to allow the light to travel from me to her. At first she said that she would give the pain she was experiencing a rating at an 8 out of 10. After I held her wrist for roughly five minutes, she reported the pain to be more dull, rating it at a level 2 out of 10. I have done energy work on people throughout the years as a Reiki practitioner and master, and never have I done a healing on someone so quickly and so easily. This is an amazing healing tool, and beautiful, at that. Thank you Twisted Sage. I am deeply grateful. 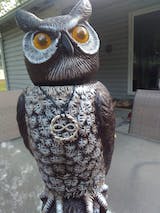 I bought my shamans wand and it arrived just before a major ceremony I needed to prepare for. I happened to put it on a chain to wear for the ceremony, and I felt greatly connected with my highest self,it helped encourage an amazing energy shift..

I like it fine and enjoy wearing it every day!

I pretty certain that this is hands down the best product that I ever got from Twisted Sage besides my Sits Pyramid! I mean I love everything from them but this wand is seriously next level!! 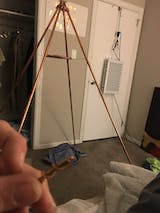 I got my infinite light pendant and gave away my golden fire coil. Wearing it on its own I got nothing describable from it. I really missed my gfc so got a new one and took off my IL. Instant sparkles everywhere. Today I put my IL on with my gfc, whoah. Amazing. Looks wise it seems a lot of jewelry for me, but it feels so intense I’m going to do it anyway.

My perception is that these rings actually create water that is more absorbable.
I often tend to be dehydrated and it doesn't take as much of the water within the tensor ring to rehydrate me.

I love the energy and feeling it allows me to tap into. Such a beautiful piece I recommend all!