NEW option!!
With packaging, for gifting to others! Instead of blocking harmful EMF’s and Radiation,
our tools are transforming the energy
into something healthful and beneficial!!

The Golden Fire Cell Phone Tab is an
efficient and powerful EMF protector and transformer
encased in a natural resin shell.

The self-adhering cell phone tab is found to be highly effective
in remediating harmful radiation from your phone
and other electronic devices.

Instead of trying to block harmful energies,
our tools are transforming non-beneficial electromagnetics
into a smooth and highly beneficial energy.

The 1” Golden Fire Cell Phone Tabs have a super-sticky rubberized backing which stays readily onto any surface.
Apply to your Cell Phone or Cell Phone Case, Tablet, or other electronic devices.

For those who are super sensitive to electronics, using our Cell Phone Tabs allows them to freely use a cell phone again!

Comparing ours to other EMF remediation products,
our tools are not trying to block harmful energies…

They transform the energy into something beneficial and useful for
the person on a physical, mental, and emotional level!!!

The newly updated Cell Phone Tabs are bringing through
all that the Golden Fire Tools have to offer,
as well what the traditional Vortex Cell Phone Tab design had offered its users!!

The Cell Phone Tabs are 1” in diameter.

The design in the center is the Golden Fire Torus, whose energetics are carried through each individual Tab, for the person who uses it.

The background is semi-translucent to partially blend with your device’s color.

An analysis of this Tensor tool was performed by GDV Source LLC. The data generated relates physical, emotional, and chakra energy response to the use of an active cellular phone (iPhone 5S) with and without the Vortex Cell Phone Tab. It is worth noting that this study was done on very short term exposure to both iPhone and only a 5 minute exposure to the Vortex Cell Phone Tab.

Tensor technology is indeed a “conscious” technology. The one consistent answer is the device changes aspects of the user’s energy in all of the test subjects for the better. In all of the test subjects the iPhone had negative effect on at least one aspect of the user’s energy level after minimal exposure. It could be concluded after looking at the data that no two test subjects experienced the same changes after the cell tab was applied; however their most significant areas of imbalance were affected the most. Five of the six test subjects gained improved brain balance, which is the degree of functioning between left (conscious) and right (unconscious) brain function. Stress levels were improved 65% in test subjects, emotional energy was increased by 50%, where as physical energy was increased by 16%. Chakra alignment seemed to gravitate towards improved alignment with community overall. Three subjects experienced chakra alignment with the device.

“Electromagnetic fields produced by cell phones are classified by the International Agency for Research on Cancer as possibly carcinogenic on humans,” according to the WHO Media Centre.

*May interfere with cordless charging devices*

Ever since I’ve placed the cell tab on my phone. My eyes don’t feel as tired anymore. I can be on all day long and I don’t feel the harmful effects Id normally feel. It’s a great product and I’ll be getting one for each of my family members soon. Thank you! 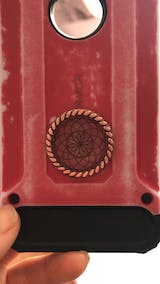 Sticks on great, and feels good too.