The 4" tall, 60 degree pyramid, is bringing through the same energetics as the Ascension Pyramids we create here at Twistedsage Studios.

The 3" Regeneration Coil, nestled up under the pyramid, creates the energy movement, while the four brass Golden Light Rods help anchor in the space. The tip of the pyramid is a combination of Purple Lepidolite, Quartz, and Feldspar, all encased in EcoPoxy, a plant-based resin. There is also a small Regeneration Ring inside of the pyramid cap, a Golden Fire Infinite Heart at the bottom of the Coil, and a Golden Fire Wand (the brass tube) within the Coil. These physical pieces are molded into the 60 degree pyramid geometry we call the Ascension Grid Pyramid.

Expanding on the energetics of the Ascension Pyramids, we are witnessing a completely new concept in holding space.

The Ascension Grid is holding space for the connection to Universal Peace, Quantum Harmony, and the field of Neutrality. NEW!  All Pyramids are now holding the energetics of the Wisdom Rings!!  Please check out the Wisdom Rings product page to learn how to work with this phenomenal field!!!

The Pyramid itself is holding space throughout your home for that same soft and gentle, peace and calm, yet high vibration energy, as all of our larger Ascension Pyramids do.

The 4" tall, 60 degree pyramid, is bringing through the same energetics as the Ascension Pyramids created here at Twistedsage Studios.

The 3" Regeneration Coil, nestled up under the pyramid, creates the energy movement, while the four brass Golden Light Rods help anchor in the space.  The tip of the pyramid is a combination of Purple Lepidolite, Quartz, and Feldspar, all encased in EcoPoxy, a plant-based resin.  There is also a small Regeneration Ring inside of the pyramid cap, a Golden Fire Infinite Heart at the bottom of the Coil, and a Golden Fire Wand (the brass tube) within the Coil.  These physical pieces are molded into the 60 degree pyramid geometry we call the Ascension Grid Pyramid.

The Lepidolite comes from a sacred space near Angel Fire, New Mexico.  We use this Lepidolite in our Heddeka Coasters.

The Quartz is a fine powdered milky quartz from the Black Hills of South Dakota, which is also used in the Ancient Alien Artifact replicas.

The Feldspar, also from the Black Hills, contains a variety of Quartz, Garnet, Tourmaline, Mica, Lepidolite, and other silica.  This is the mix we use in our Crystal-Infused Inks that we print our shirts with at Twistedsage.Press.

Each grid point holds a golden-silver light.  Even the smallest grid point carries a golden ball of light, connected with the heart of the earth.

There is a wall of golden fiery light about 14" wide, the Ascension Grid Lines, which travel between all grid and pyramid points.

These Grid Lines are the same energetic field which flows out of the copper Ascension Pyramids.  You can simply visualize a line going between each grid point.

More on the Ascension Pyramids

Below is a little more of the channeled information on the pyramid, as channeled by Brenda Schnose and The Elders Three.

Below is the work in progress, on  We are still working with seeing and understanding more of what it is doing...

The field that these create is the energy of the Healing Field.  That field of energy that Healers pull from when they channel the energy through for others, or themselves.

This field, like all others that we work with, are an incorruptible energy.  They are above Duality, which we are used to.   It is a field without an agenda, as it is beyond duality.  It can be used for healing, for clearing, for transformation, and so much more.

Sit with your personal pyramid and connect into this space.

The Space between the grid points is not the field of Neutrality, though you can still find it in this space.  It is not a field of Healing, but that energy is within it.

Those who are connected to soul, ones who are doing the work, they can see and feel it.  Within this space there can exist the good and the bad... and it is all good!  Duality within Neutrality is neither good nor bad.  It just is.  But it is a much higher version.

Within the space of the pyramid is the field of Neutrality, of Quantum, and also the Quantum Heart.

What does all of this do?  More than we can see, we do know that.

Harmony space on Earth.  It is a Compassion Grid.  Bringing the etheric version of Compassion and Harmony onto the Earth.

For ones who want to connect, this field is there.

The information is simply my limited transcriptions of questions answered, when the Ascension Pyramids were first anchored in on the 10th of January, 2020

• Shifts all aspects out of duality reality.

• With the space of neutrality, we step in and releasing traumas dramas and junk. Which have to, to raise vibrations.

• Surrender being able to step in knowing your soul doing the work, whatever that work is for each person

• Can’t step in with intent, or will no longer be in neutrality. The Soul already knows what the intent is… Focusing on what intent is from your perspective will collapse the field.

• Extremely high vibe, but in comfort.

• Comes through body as well your reality.

•No thought no feelings just there Being there, holding that space

• After finding space of neutrality bring it into body again, hold it here for as long as feel. Everything and nothing.

Brenda and I have been using this field of Neutrality for a few months now, and it has created the most tangible shifts in my being that I have ever had. It has cleared up issues I have had with soul aspects, and has created tangible changes in my daily being. I have been more happy and content and less anxiety and stress, clearing aches and pains and any emotional reactions due to releasing work, as they present, and with quickness and ease. Truly one of the most powerful fields we have ever played in, and has shifted all soul aspects as well. Again, very tangible shifts have occurred while playing with this new field. And it is transcending us out of the Duality Matrix to where the old world is simply fading from our reality.

We also have the ever-so-popular, orgonite-looking, little pyramids, known as Quantum Grid Points. which is connected to the same energetics as the Ascension Grid Pyramid!  There is more information on that page, on Grid Work!

I love my pyramid. My dreams have been much more vivid. Thank You so much ❤️

Eye have been using the Ascension Grid Pyramid for over a year now; i keep it in my backpack for work & when I’m out & about BEiNG the Water Shaman, riding the water dragons from peak to peak. The pyramid sits on the dash of my work trucks… well for starters every drop of water that comes into my field of awareness becomes EXTRA charged with the whole & completeness of my sacred HEART. Second I’ve noticed MASSiVE shifts happen EVERYDAY , from being parked outside of Jails, courthouses, abandoned buildings , properties ect. The shifts are beyond my levels of perception it seems like I’m a mobile LiGHThouse & ALL dense energies, frequencies & vibrations become aligned as I’m driving ALL around the Rocky Mountains. I’ve noticed that when I’m in my HEART & NOT holding onto things with resistance, it’s like I’m a mobile Ascension Healer instantaneously. People eye come into contact with start releasing & healing LiFEtimes of “STUFF” & as long as eye remain a hollow bone things just alchemize! Eye forget to clean & clear myself often sooo eye also use this tool to help bring me back from when i get too caught up in the duality… simply take a deep breathe and with ease & grace eye FLOW with NEUTRALITY ♾💗♾ 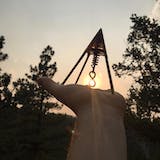 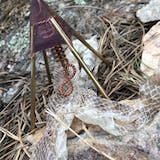 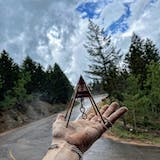 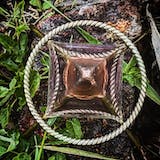 I am happy to have brought this amazing pyramid. I hung as tall over my bed in my van and the first night that I slept with it, it was out of this world taking me thousands of years away in the astral flying. The energy in my van every day is awesome I love working with this tall very much. Sometimes I do not have to even bother about going to heart space with this tool because it automatically takes Where ever I need to go. I wish to thank .Twisted so to team for this wonderful tool.

This tool has really opened up portals for healing myself and others. I use it for my distance reiki and crystal healing sessions and its physically felt by some. Personally use it under my larger pyramid on a mirror beside the divine i am generator and alchemist set with some orgonite I made and wow 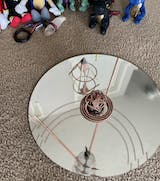 I love the fact that the pyramids all tie together. I am striving to work from my heart space and disconnecting from the dense energy and plugging into the light. I am totally grateful for all these most useful tools that Twisted Sage provides, and to have crossed paths with all of you. I am truly blessed... 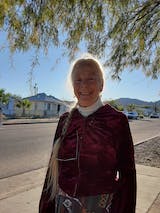