NEW UPDATES!
The Ascension Pyramids all have access now, to the new Chalice Ring energy!!  That crystal clear, pure light that comes from within, but has remained mostly hidden since the beginning of time and creation, is now accessible through the Pyramids!!
If you already own any of the Ascension Pyramids, the energetic updates happened automatically!!
More on the Chalice Ring energy within the Bangles or Pendants pages.

Our favorite and most easily portable Meditation-sized Pyramid! The physical pyramid anchors in a larger, energetic, pyramid.
The energetic pyramid covers the entire building, and more.

This field expands to meet your needs.  If the pyramid is in an apartment, for instance, it will expand to cover the entire complex.

The Sits Pyramid has a 53" wide base, and stands 64" tall.
The new cable system is situated above your head, so there are no wire cables at the feet of the pyramid to trip over while getting in and out of the pyramid.  The cable system sits at 48" off the ground, and makes an excellent nest for your Cosmic Sundisc and other tools to sit, as pictured!

The Leg Extensions for the mini Pyramid along with Carrying tube.  The Sits Pyramid also includes the entire mini Ascension Pyramid Kit, as listed below.

1) mini Ascension Pyramid.  The top of the Pyramid is held together with a jump-ring, so it is collapsible and portable.  The cable basket under the apex holds the Cosmic Sundisc, while keeping base at the appropriate distance to create the 60 degree angle needed to hold the energetics.
The Pyramid itself is made with 1/2" copper tubing, cut to sacred measurementss.

2) Cosmic Sun Disc, 8-1/2".  This is what helps generate the torridal field, the moving field within and outside of the pyramid.  The Sun Disc is a powerful tool on it's own, and more information can be found on the Sun Disc product page.

4) Harmonic Creation Field Trio is the three ring set pictured.  The Trio holds a space for grounding, connecting, and simply allowing more of the individual's Light to come in.  The Pyramid Kit includes this larger Home Set of the Trio, which is the one we personally choose to use on the Pyramid.  It is perfectly acceptable to use the Personal Set, if that is what you already own!  More information on the Trio can be found on the Harmonic Creation Field Trio product page. It does not matter the specific placement of the tools, only that they are all together with the Pyramid.

The 1/2" copper Leg Extensions are cut to Sacred measurements. The copper feet are capped, with the cable system permanently attached above the head.  Simply slip the Leg Extensions onto the mini Ascension Pyramid, and you have the perfect sized meditation pyramid!

The heavy duty Carrying tube has a removable cap, and allows for safe and easy transport for your pyramid.

The 2" diameter Carrying Tube, is 75" long, and holds both the mini Ascension Pyramid and Leg Extensions fully inside.

Most of us keep the mini Pyramid in our bedrooms, though we also keep one on the table at Twistedsage Studios.  We place peoples names, or specific situations, within the larger Gaia Sphere under the pyramid, to hold space for the specific person or situation.

We have seen some huge shifts in both people and environments with this set-up.  It is just as energetically powerful as the full sized Ascension Pyramid, found on the Ascension Pyramid product page, while the full sized Pyramid feels more potent physically.  The field within the Pyramid is more of the epicenter of the Torus, yet the work being done while within the greater field of either Pyramid is the same over time.

The space within the Full-sized Ascension Pyramid is rather intense, while the space outside of it is just like the mini Pyramid.. calm and peaceful.  I can only handle the full-sized version for a few minutes at a time, after sleeping under it for several nights.  The mini Pyramid is always a welcomed energy though, as is having the larger Pyramid in your space.

Within the Pyramid is also a great place to put whatever you need to be cleared or charged... such as supplements, essential oils, medications, food, or water.

Again, it does not matter how the pyramid is assembled, it works because of the unit as a whole.  Some like to put the Sun Disc on top, or everything in the center of the pyramid... doesn't matter, as long as all pieces are together as a unit.

*** Having just the Pyramid itself, without the other parts to the whole, will not produce the same results.  All five components are needed to create the Ascension Pyramid.

More about the Ascension Pyramids

Connects the Heart of the Universe and the Heart of Gaia,
mixing and expanding them as the toroidal field of the Quantum Heart.

The Heart of the Universe comes down as a column of Light, with Blue, Gold, and Silver Rays.

Comes together as the Quantum Heart

Soft and Gentle.  Peace and Calm, within the Quantum Heart.

Heart of the Earth comes up through the Pyramid legs. Heart of the Universe coming down as a beam of Light, and all mixes together within the structure, before expanding out into a larger torridal field of the Quantum Heart.

May take longer for some, others will be affected right away.

The physical pyramid anchors in a larger, energetic, pyramid.
The energetic pyramid covers the entire building, and more.

This field expands to meet your needs.  If the pyramid is in an apartment, for instance, it will expand to cover the entire complex.

More stories with the Ascension Pyramids:

The 60 Degree angle is what we were drawn to use for the seated Ascension Chamber angle.  This was the Chamber right before the Pyramid Chambers came to be.  We later found the Bosnian Pyramid complex uses 60 degrees on some of their pyramid angles.  The Bosnian Pyramid Chamber we created in August of 2019, which is now permanently housed in Twistedsage Studios, is like the Bosnian Pyramids, in that it is not connected to the Earth Grid system at all, rather it is connecting the Earth to an interstellar grid system.  This is unlike other ancient Pyramids on the planet, which create Earth Grids.  Such as the Egyptian pyramid complex... it holds us in 3rd density psychical reality through it's grid system.  Such was needed for the times we had been playing in.

The larger Ascension Pyramids do not hold the same energetics as the first Bosnian Pyramid Chamber we created, rather the newer Ascension Pyramids all work with the Light of the Earth, our Soul's Light, and the Light of Creation and the Universe, to bring through a field of Neutrality.  Neutrality is a step out of the Duality Matrix which our Souls have been constantly born into within this known Universe.  We are stepping into higher aspects of the Universe, as we connect more with these higher aspects of our own Souls.

My personal and family observations:

I love adding the Activator to my pyramid.  It gives it a wonderful extra boost, though a boost is certainly not needed!  You can add other tools, crystals, oils, etc. into the mix as well, to customize your own Sacred Space.

Our mom's life-long anxiety stopped when the Pyramid was added to her bedroom.  It shifted my daughters energy when we added it to our home.  You can feel it shift the entire home when it is set up.

I often times use the Pyramid to do energy work for others, by simply holding space for them to step into the field.  Often times this is all that is needed for the issue.  The field of Neutrality within the Pyramid is a powerful force in transforming duality.

The Ascension Pyramid line is absolutely one of my all time favorite tools!!!

Some of the consciousness work you can do within the pyramid:

The video below is the original Sits Pyramid product video.  There have been updates to the physical pyramids, including a new cable system, so no more cables at the feet!!  Please refer to the updated video at the top of the page.

I have used it consistently since it arrived. I am aware of feeling a clearing throughout my energy body - but also this blissful sense of peace, well being and support. It helps clear anxiety and my heart is really helped by the energy. I have a couple of friends that are dealing with Adrenal Fatigue, both have noticed a surge of energy after sitting for a short time. My dog clients are very drawn to sit under. I had wisdom tooth extraction this week and didn’t get any swelling and little soreness..I am sure the pyramid had something to do with rapid healing. You guys are out of this world. Beyond grateful for what you do for this planet and the souls that inhabit it. 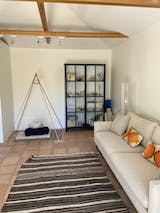 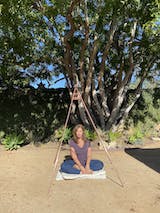 D
D.C.
Love my Pyramid (and the other products too)

Since receiving the Meditation Sized Ascension Pyramid Kit, I sit within it for about 15 minutes almost every morning and evening, and sometimes more. The energy received allows me to prepare for or close my day with calmness and clarity. Additionally, each person who has been placed inside this pyramid (physically or spiritually) has received calmness and peaceful energy as well, which has lasted several days in some even with distance away from it. This pyramid and the vibrational energy it resonates is amazing!

I have several other products as well, and each are just as energetically unique a product as this Pyramid. I am still learning to invoke each product for maximum impact and effectiveness. I regularly recommend Twisted Sage products to those who I work with that are open and interested in their own self awareness journey.

I know I have already said that! I love the people of Twisted Sage and their products!
My new purchase is this sitting pyramid, and even though I do not yet have all the components, I am enjoying what I do have!
P.S. My gratitude to you all! You are beautiful lighthearted people always willing to help/assist, and making sure you fulfill our orders in such a speedy manner, amazing!
P.P.S. My special thanks to "Sage Mary" :)) Your patience and wisdom is greatly appreciated! 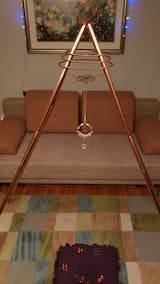 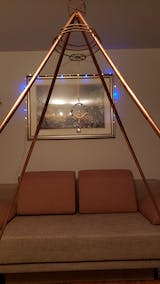 I really like the pyramid. It's very easy to set up.

The energy that you get from this pyramid is huge! Especially when you sit inside the pyramid! It’s also very easy to set up and move to another location! The energy is also great for sleep too...but also pack a punch with using your intention. Love this so much and I’m already feeling the shift in my own consciousness! 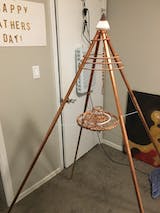 Reviews
Back to the top
x