The Starburst is made of steel. The four longest Starburst points are welded onto the 3" Ring. Both are electroplated with copper afterwards.

Imagine stepping into a higher vibrational space of healing, of all knowing, of clearing, whatever it is that you need, and having all the support of your Soul, along with many master Beings, each with their own gifts and talents, ready to be in service to you and your Soul.

The space is created with this new tool, it is up to you to fully access it, or not.  If you, or those around you, do not consciously access it, things still occur.  Healing, clearing, connecting with your higher self, and the same happens with the environment.  All is  automatic.  But if you choose, there is an entire new world waiting for you to access.  A world of magic and miracles, in the highest and best, as perceived by your Soul.

This space is beyond time, beyond dimensions.  It is a space where you find the Universal You, that higher aspect of you as Source, Soul, Creator.

You also find Tok, a master healer of the blues.  These blue, wing-ed, plasma-like beings have always been here, they are just now ready to step forward.  Forward in this space in which is created here, to work with all of those who's Souls choose.

Each person will have a different experience.  Each will see it a little differently.  I see this space as almost a saucer-looking space, but vertical.  There is the central space that intersects the surface of the earth, and a beam that extends both up and down, like a column of light connecting both Earth and Sky.  Source and our Earth mother.

The Starburst is made of steel, as copper nor brass would hold this creation in our physical plane.  The four longest Starburst points are welded onto the 3" Ring.  Both are electroplated with copper afterwards.  Your Starburst may lose it's electroplating through physical wear.  The copper may obtain a patina, darkening the surface of the ring and the Starburst.  This is expected, but does not affect the energetic quality of the tool.  You are still welcomed to send it back for re-plating at anytime.  It is free, though may take a few weeks for it to occur.

How to use the Wings of Tok

You can place it in the environment.  It will create that space.  You do not have to work with it from there, but you really should!!  Simply step into that space it creates.  Feel this space. Know that you are connected to your Soul, and that it is in charge of all that occurs here.  Then you can start seeking the assistance for what you wish to work with. Healing of the physical, mental, emotional, life situations.  Clearing and harmonizing timelines, or the environment, or family lineages.  It is all up to you and your Soul.

Once you know this space, it is yours.  You no longer need the tool present.  The tool can be used over and over again, in different places, different situations.  The field will always be there, or will be present for as long as is needed.

Be sure to watch the Wings of Tok Webinar to learn more ways to use this phenomenal and powerful tool!

The Creation Story... of the Wings of Tok

The Wings of Tok was born out of synchronicity, as all of our creations are.
Someone requested a mini Starburst, and though we do not take on custom orders, I happened to have one sitting around from developing the Starburst and the Key Pendant. Since the Starburst has both the Harmony and the Golden Fire in it, a Regeneration Ring seemed like the appropriate thing to add to the design. When we did, it created a beam of Light that connected the Starburst deep within the Earth. After looking at it more, I could see a column of Light, both up and down, with a bubble-like space in the middle. It was grounding and connecting, and creating a sacred space on this plane. I had seen this energetic space before...

When Brenda and I got together for further activation and readings on the tool, I told her my intentions on creating this tool, and about the two energy worker friends who were looking for a tool to clear demons from people and places. Of course, we know demons to simply be entities, yet can present to others or be perceived by others as such critters. I wanted this mini Starburst, welded onto a 3" Regeneration Ring, to be able to clear a person of entities, soul contracts included, as well as clear entities from a space that may contain a portal/vortex they are connected with, with simplicity and ease. And so it was.

Like the Starburst and Key Pendant, this new tool connects with the higher soul aspect of all beings, and brings them to that space of where they are one with their soul. It is within this space that agendas which no longer serve are released. The Key and Starburst are already doing this to some extent, though the new tool was able to work on a much higher level to clear those more stubborn and higher connected soul contracts and entities from people and places.

Back to the energy field I saw in this newly combined tool... It reminded me of the ball of Light we have been playing with the past few months, that is created just within the Earth's surface, which extends up and down as a column of Light as well. It is within and around this space that I see the winged blue plasma beings. I asked Brenda if perhaps they would mind working with the field this tool creates. Instantly I felt heat on my face and could feel beings all around. Brenda connected and asked if they would be willing to be a part of this tool, in the highest and best, and that it would be an honor to have their assistance. And so it is. They come on their own free will to assist those within this space, in the highest and best.

Who are these blue winged Light Beings? We began working with an energetic space earlier this summer, in June of 2019 or before. That is the ball of Light which is also a column of Light. This is when I first witnessed the wing-ed blue plasma-like beings assisting with some of the higher level of work we were doing. My Facebook profile picture was actually one of these Beings, how I see them, back in 2017, though I never actually saw them until recently.

Brenda has been working with Tok, a Master Healer of the Blues for over 2 years now. I did not realize they were the same race of Beings until today.

When asking if they had a name for this tool, or if they would share the name of their origins or race, no one came forward. After a moment, Tok came forward to Brenda and said "Wings of Tok." Of course, when you are a high vibrational Light Being, none of this stuff really matters, so we played with other names, and sat with this Harmonic Creation Dis for another day before the Wings of Tok felt to be the perfect name of this new tool.

With that, we are proud to present one of the most powerful space creating tools to date: the Wings of Tok!

I’m sure many of you can relate to this phenomenon. I ordered the Wings of Tok and immediately waves of energy started moving into my world. Subtly at first, then increasing daily until the tool was delivered with a tsunami of energy. I was sitting at my desk, feeling an extremely positive influx of high vibratory energy, so much so, that I thought I’d step outside to ground and give gratitude. I opened the door and sitting there was a tiny package from Twisted Sage Studios.
I don’t order tools often, maybe once a year, but this has continually happened. And repeatedly what has also happened is that within a relatively short period of time the energy is integrated in my field and no longer seems extraordinary.
So, I’m beginning to understand this as learning to ride these invisible waves with grace and ease, mastery. And the image that comes to mind, is me surfing those 80 foot Atlantic Ocean waves that roll into Portugal every year. Cowabunga!

Great tool! I had bought before and lost it or I like to think it went were it needed to go. I would always think about it. So I decided to order again. I am very happy with it. 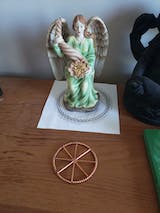 I had been looking at the Wings of Tok for a while, then one morning I saw and felt them flow into my chest - clear as day, that afternoon I placed the order.

Then a few weeks ago I was on a trip with some friends and my girlfriend slipped and twisted her arm (we didn't know how bad it was) and that night I had her take the Wings of Tok and rub it on her arm, and then she slept with it on her arm - she didn't see the doc until 4 days after the incident - it was dislocated and broken. When she got to the ortho - he looked and it wasn't that bad, she just needed to be in a sling for 3 weeks - no surgery. I don't know how much the Wings of Tok contributed to her being in much better shape than expected, I just know it did, and I am grateful, and so is my friend.

This is a very powerfull tool. The vibration is very high, and it harmonizes all of the electromagnetics proof! It works for me better than a Harmonizer. The Wings of Tok pushs my personal development. Old stuff, can I leave behind me, very quick, and it brings me more clearness and more Energy in my life.
Negative Persons around me, getting quite, since I have this Tool.