I had been trying to make the Dragon Wands for weeks, and they just would not come in.  Like us, they are ascending higher, and needed a higher space to connect in.  We used the Regeneration Ring measurements to create this higher space for us to meet in.  The new wands are similar to the older version, but instead of the wand connecting with a specific dragon, this wand takes us to a space where we can connect with the higher aspects of many heart-based dragon beings that are available and in service.  The Dragon Wands no longer need to be made specifically for the person.  We are proud to introduce the Cosmic Dragon Wands!!!

An Introduction and Attunement
to Healing with Dragons

The Dragons we work with are healers, healing from the paradigm of raising the vibration from the core, on all bodies. The raising of vibration cleans, clears, and heals. They work with the Earth and the Earth Elementals through the process, all in the Highest and Greatest Good of All Creation.
Through the raising in vibration, we as individuals, and the planet, are propelled forward, affecting our Galaxy, our Universe, and All of Creation.
In working with Dragons, we find their skills and abilities to be very tangible and beneficial in clearing and healing. We find the Dragon’s breath and unconditional love frequencies of the Dragon’s Songs to be profound in dissolving, clearing, and healing as quickly as your mind will allow.

Dragon Wands can be used on the physical body for energy work, for clearing, raising vibrations, opening flow, as well as environmental work.

When working with the new Dragon Wand 2.0, it is similar to the Shaman’s Wand, in that you create a field with the wand. Within this space is where you will meet the Dragons.

Wands are approximately 9″ long, and have a medium-sized Golden Fire Infinity permanently attached, as well as a removable clasp.

It came really fast! It is beautiful and I LOVE it! The energy is Great!

I have to say that these products are absolutely beautiful in workmanship and energetic frequency. I have several of their products and I am never disappointed. This wand chose me. I was going to purchase the Shamans Wand and clicked and went to my bag and realized I had actually chose the Dragon Wand. I went with it as I know my innate knows better than I do. I am so glad I purchased and cannot wait to start to use my wand with mediations and remote work. If you feel drawn to these products do not hesitate to buy. You are here for a reason and you have light work to do. Thank you Twisted Sage!

Great wand to work with dragons and various energy fields! Thank you for making this.

B
B.
Great healing wand

I waited until it felt right to order, it kept appearing in my meditations for a week so I finally did.

I’ve been working with dragons for years, channel them for energy healing, and more.

Similar to when I do energy healing on clients, my hands activate on areas that need work. This wand works similarly with intuition in this way.

Meditating and experimenting on myself, I wasn’t feeling much of anything until I reached an energy center that apparently needed work, I suddenly felt my body channels open up as that blockage was cleared and light came in! Also had tingling in areas of my body that need healing, and on my crown. To do this I entered heart space, with both hands wrapped around base, and pointed wand at different parts of my body slowly and taking my time, feeling the energy shift.

I also see this wand acting as a giant comb for clearing. I visualize waving it over the city to help clear the energetics.

I don’t feel this wand is done revealing itself to me yet! It’s asking to go to Sedona next.

I included a picture of a card from Diana Cooper’s dragon deck that matches the energy I feel from this wand. Which is for earth and fire ley lines. The wand says that just being with me as I travel it will be doing this work. 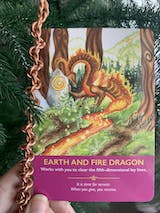 What can I say but what a fantastic piece of artwork. I have been talking a strange language whilst out walking now for about two years and it wasn't until by chance I was googling something else that I realised I wasn't alone in this pastime, I actually thought I was going mad. I now have a tool that I hope I can connect with the dragon energy around me. Will keep you posted .