The Activator brings together all the properties of the individual tools listed below, while creating something much more exponential...
...a higher Heart Light connection!!


The Regeneration Ring additions to the 3.1 Activator boosts the frequency and vibration and light of the Activator, but also creates a heart connection to this light.
The two lights come together in the Heart, of both Earth and of Source/Soul/Creation.
The entire field is like a sun, as radiant light.
The sun within you is activated and expands your Light.
The feeling of Peace comes in.  The energies intensify as the energy field or body is cleared, and then it comes back to peace.

If you are sitting in that field of the torus, can feel the energies of the Inner Earth people.  Can communicate with them at a deeper level through this field.

When I placed the prototype on a local Sacred Site, the Inner Earth Beings who live there came to the surface and danced!! I shimmied and shook for about 20 minutes, seeing the larger field the Activator was creating around the Medicine Wheel, with golden sparks shooting out the top of the Activator. Below the Activator I could feel the freight-train of energy just flowing downwards.

The reading I got from Brenda on the tool afterwards was such a confirmation for what was witnessed!!

This site is home to a rose quartz medicine wheel, and the portal/vortex in the center of the wheel naturally pulses upward and downward. There is an entire city of little beings with long curved noses that live below. I often take people there on journeys, where one would have to ride an "elevator" down to the city and a representative would meet you and take you around... now, they just come up and hang out in the field above ground!!

I love sleeping with the Activator near the head of my bed at night.  It also feels good to place on the body.

Encased in EcoPoxy, a plant-based resin, is a 4" Golden Fire Generator, Standard Golden Fire Coil with Regeneration Infinity.  A Harmonic Creation Field Trio holds the base in place, with a Heavy Gauge Golden Fire Ring.

More about the Golden Fire tools and the Sacred Heart Activation can be found here.

And, don't forget about the Harmonic Creation Field Attunement video that can be found here.

Over the last 30 years working with crystals, stones and pyramid technologies I was delighted when I became introduced to the spiritual/scientific technologies from Twisted Sage Studios. When Mary gave us a tour and introduction of the studio my wife and brother-in-law were astounded at the precise attunement of the tensor rings and a clean high vibrational frequency. I have noticed that the frequencies are very consistent and precise which makes them wonderful tools to work with. After only a couple of days return from my visit to South Dakota my neighbors sent me a text exclaiming about loving and healing energy coming from our home. We also feel that the neighborhood is calmer, more peaceful and I’ve also seen more animal life on our property then ever before. We are very grateful for Brian and his team for this wonderful service to humanity as we are all raising our own vibrational frequencies to attune to the earth at this time. 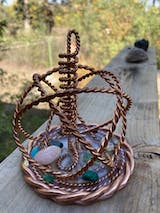 I can feel the Activator 3.1 cleanses and charge my body and soul when I lock my hands on to it for a few minutes. I can feel it work internally wiping away all densed energy that I’ve accumulated from the food that I eat to the people I surround myself with. It also gives me more mind clarity. This is some powerful stuff!!

For about a year there has been a troubled boy in the neighborhood who would put litter in my yard almost daily, including a styrofoam half eaten dinner. On March 19th, I put the Golden Fire Activator on a record player turntable using a couple brass rings I have to clear the spindle and turned it up to 78 RPMs. IIRC correctly, the litter stopped within 48 hours and hasn't happened again. It's presently April 14th.

In the first day of using the Activator 3.0, my mind became clearer with more energy. I also woke up with almost no brain fog. That's pretty remarkable because I'd been dealing with a serious complication the previous three days due to a long ago broken bone in my back. The issue had me really wiped out.

Recently, I put my food supplements next to the turntable. It's taking about half as many capsules to produce as good or better results as before.

I love it so much, I'd like to get six or eight of them and put each one on a separate record player in a van and drive around hospitals and schools. Maybe a trip to DC would be fun, too, to share the love. If that worked well, then get two or three vans going and then maybe a fleet travelling around the country would be awesome. Anyone else who wants to could borrow the same idea. :-) Pretty sure the drivers would love their lives so much from all that energy flowing through them.

More than likely the whirling action would produce an even greater activity level and go further out as well.

Kelley, author of "How To become A Thrillionaire"

R
R.C.
This is just a wonderful piece to own. Definitely a ...

This is just a wonderful piece to own. Definitely a must have. Makes for a great gift to give a loved one on any ocasion. You can dedinitely feel the diference in the space this is placed. I use it to also cleanse and charge my stones. I have even gone as far as feeling the energy the GFA 3.0 emits by placing it on my bare stomach on top of my belly button where the skin is slightly sensitive. When I do that, I can feel the electric field within my body be activated to the point where parts of my skin slightly twitch like if it was being zapped by a very light electric current. A great energy generator to own.

No reviews yet Write a review
Back to the top
x