There is a fairy being, of the highest good, associated with each wand.

The wands can be used for healing and protection.

Crystal sun of Earth. Elementals. Intention, to bring the healing energy of earth into the body through the Fairy Wands.

Healing wand- healing the human, including the emotional bodies.

Produces a Tensor Field, which restructures Electro Magnetics. Restructures water.
Wearing these Fairy Wands as a necklace does offer the body EMF protection.

To use the wand:
Hold the wand to connect with the fairy. Once you meet them, you can ask for a name if you like.
You do not have to carry the wand, rather simply ask the fairy to be there when you need!

Can feel the faerie vibes from this wand powerfully. Very sweet and playful energies... Thank you twistedsage for your beautiful work! 🙏 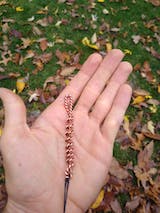 A
A.
Love my fairy wand!

I feel like the wand connects me to my inner fairy dimension. It centers me also is a great EMF protector. It's light and love wearing it. Highly recommended!

I have worked with the Fae for many years, but since I moved to the desert I hadn't seen many. I love that they are back now!

A
A.
Powerful Fairy Wand

One day I was looking at this wand online and as I was doing this I noticed something moving in the corner of my eye which moved in front of me and I "saw" this little human male figure in front of my eyes and mentally started to communicate and gave me a name for me to call him by. I bought the wand!
When the wand arrived and as I was opening the package I noticed a group of Fairies around the room I was in. Once I had the wand in my hand a Fairy, not the one I had seen before, showed up and gave me his name and told me he and the other Fairy were brothers, twins, and were going to work with me.
I use this wand most of the time and I ask the two Fairies for help when I need it! I wear it as a pendant 24/7